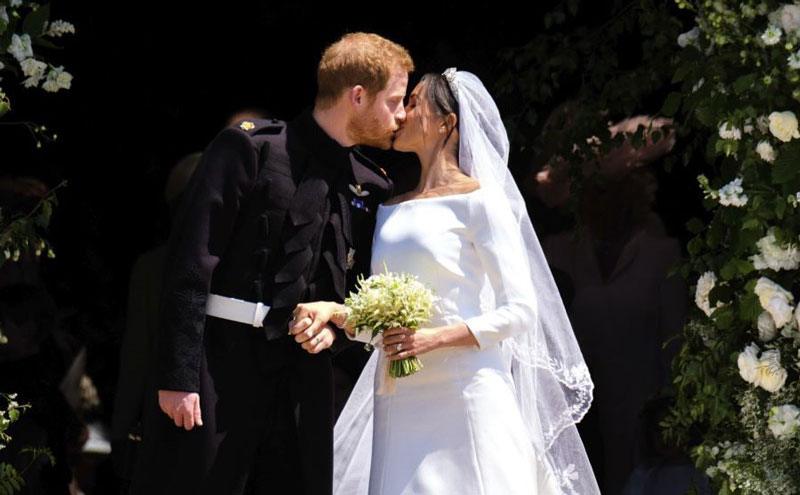 Over 29 million viewers in the U.S. tuned in early Saturday morning to watch Prince Harry and Meghan Markle tie the knot at St. George’s Chapel. ChicagoStyle Weddings was absolutely included in those watching as we would never miss an opportunity to witness such a breathtaking affair. While there were dozens of beautiful details incorporated throughout the wedding day, we compiled a list of our favorites in hopes that other couples can gain inspiration from the newest royal couple. Written by Lauren Beers.

Meghan worked closely with acclaimed British designer Clare Waight Keller (who is the first female Artistic Director at the French fashion house Givenchy) to create her timeless and elegant look. An exclusive double bonded silk cady was developed after extensive research was done in fabric mills throughout Europe in order to create the soft matte luster. The open bateau neckline and three-quarter sleeves provided a modern yet refined appearance.

In addition to aiding in the design of her gown, Meghan also included her input into the design of her veil as well. She requested that all 53 countries of the Commonwealth be incorporated, which resulted in a stunning floral masterpiece from Clare Waight Keller. Measuring at over 16 feet long, Megan’s veil was hand-embroidered with the individual distinct flora of each Commonwealth country. The Commonwealth family of nations will be a central part of her and Prince Harry’s work. In addition to the Commonwealth flora being represented, Meghan also incorporated the California Poppy (the state flower from her place of birth, California) as well as Wintersweet (which can be found on the grounds of Kensington Palace).

Prince Harry handpicked several of the flowers that were incorporated into his bride’s bouquet from their private garden at Kensington Palace. Included were Forget-Me-Nots which were his late mother’s favorite flower and incorporated to honor her memory on his special day. In addition to Forget-Me-Nots, a sprig of Myrtle is traditionally incorporated into the bouquet as it symbolizes love, fertility, and innocence. After the wedding, the bouquet is laid at the Tomb of the Unknown Warrior in remembrance of those who were killed or injured in WWI.

Claire Ptak beautifully designed a cake for the new Duke and Duchess that featured elderflower syrup made at the Queen’s residence in Sandringham (from the estate’s own elderflower trees) atop an airy sponge cake that was uniquely formulated especially for the couple. Looking to replicate the cake? The royal masterpiece included 200 Amalfi lemons, 500 organic eggs from Suffolk, 20 kgs of butter, 20 kgs of flour, 20 kgs of sugar, and ten bottles of Sandringham Elderflower Cordial.

In addition to the Duchess’ striking first look, she also debuted a breathtaking dress from designer Stella McCartney for her wedding reception. The backless, halter-necked, bias-cut gown continued the day’s theme of British designers as Stella McCartney, like Clare Waight Keller, is an iconic British name.

Placed under Meghan’s veil was an exquisite tiara that was lent to her by The Queen. Originally Queen Mary’s, this historic platinum and diamond bandeau dates back to 1932 with the center brooch dating from 1893.

The pure love between Meghan and Harry was nothing short of breathtaking when he lifted her veil and whispered “hi” to his soon-to-be bride. The coy little smiles that took place between them as well as the way he adjusted her veil, it all truly gave us butterflies.

Megan’s wedding band was fashioned from a piece of Welsh Gold, which was gifted to her by The Queen. We absolutely love the historic touches that went into their Big Day.

9. The Remembrance of Diana

While Princess Diana may not have been there physically, she was there in spirit. From honoring her memory in Meghan’s bouquet, to incorporating two diamonds that once belonged to her in Meghan’s ring, to having the same hymn sung at their wedding that was sung at her funeral, and even pairing an aquamarine ring that once belonged to Diana with Meghan’s second look, Princess Diana was beautifully interwoven into Meghan and Harry’s love story.

The love between Harry and Meghan is truly undeniable. The way that Harry told her, “You look amazing. I’m so lucky” when he saw his bride is what fairytales are made of (not to mention she looked like a real life princess standing next to her very own prince charming). We love the subtleties that occurred between them during the duration of their ceremony that showed the world that they truly are made for one another. We wish the Duke and Duchess of Sussex a lifetime of love and happiness.

Can’t get enough Real Weddings and Local Love Stories? Head over to thecelebrationsociety.com to see more, or check out Rachael+Lindsay’s sweet elopement! 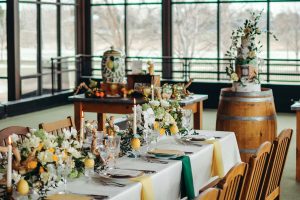 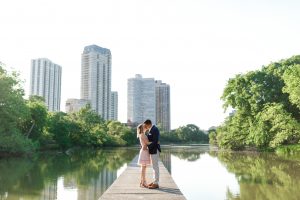