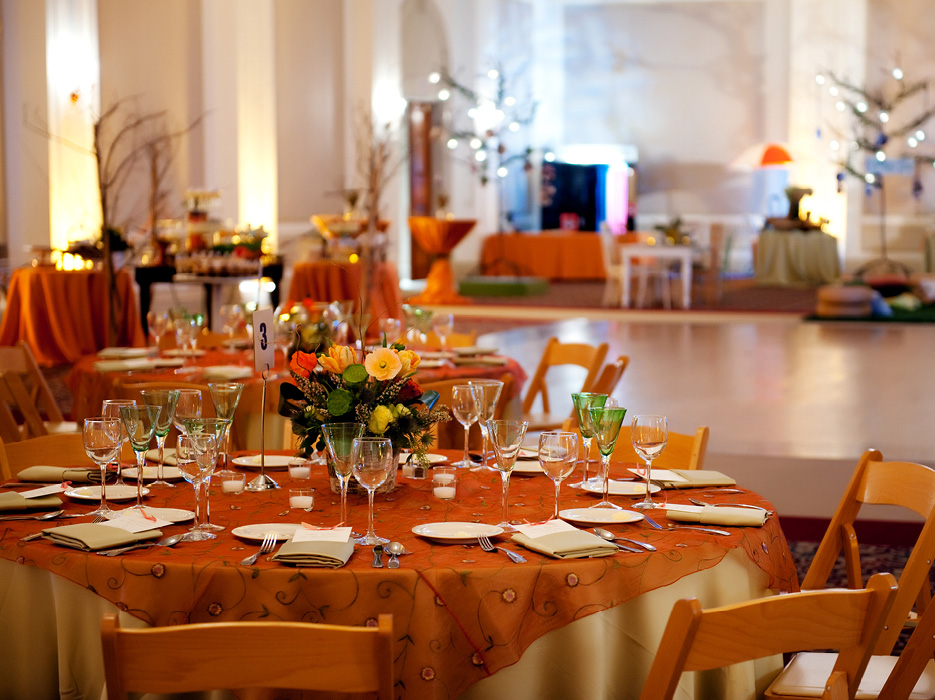 The planning for Olivia Weinstein’s Bat Mitzvah began with what some might consider a slight challenge.  Olivia loves flowers, nature and a Maine summer camp she’s been attending for the past five years, and she wanted her Bat Mitzvah to represent those things, with a dash of Anthropologie style thrown in.  The timing, however, meant that her Bat Mitzvah would be in February — a little chilly for an outdoor celebration!  Instead, Liz and Michael Weinstein decided to host their daughter’s event at The Temple, and brought in event planner Sharon Fisher and designers from Tulip to help make the event a success.  The ladies took their challenge and ran with it, creating an incredible, elegant summer-camp-in-the-woods-inspired Bat Mitzvah filled with flowers, natural elements and whimsically fun touches.  A beautifully detailed orange peony graphic, created by Luxe Expressions, became symbolic of the theme and first appeared on the invitations.  Later, guests saw the peony throughout the Bat Mitzvah, from the tops of the candy-filled mason jars that indicated seating arrangements right to the stamp on the eco-friendly tote bags given as favors.  “Olivia had very definite ideas of what she wanted,” said her mother, Liz Weinstein.  “Her favorite color is orange and we wanted to come up with a color scheme that involved orange, which is kind of an unusual color.  Once we came up with the natural ideas, the greens, the orange just felt right.”  Images by Ric Mershon Photography!

Bachelor/Bachelorette, Beaches and Pool Parties
Pastel Picnic Brunch at Sea
About This Post