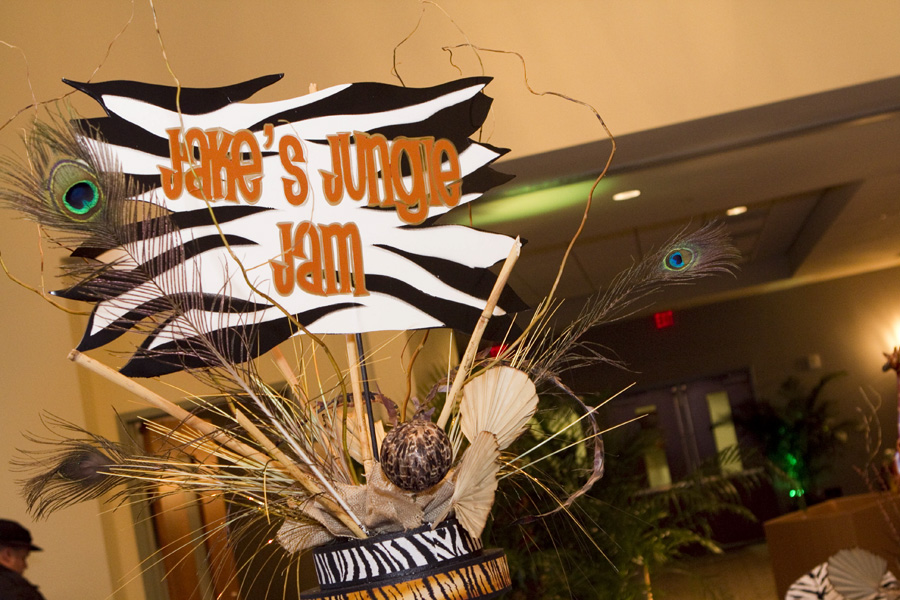 Jungle Jam are the words of the day as we plunge head first into this wild, animal filled, safari inspired mitzvah! Bluming Creativity and Let’s Celebrate went all out in creating a party that was as festive and exciting at the day itself. Greg G. Photography caught all of the fun on camera, take a look!

Can you give us an overview of the event? This was the bnai mitzvah service of my son, Jake, and his 80 year old Great Aunt Betsey Goldsmith. Betsey began studying Torah (bible) in her mid-70s, and since she had never had a bat mitzvah growing up, we all decided it would be wonderful if she could join Jake when he became a bar mitzvah at the traditional age of 13. The service was a late afternoon service called Havdallah, and was immediately followed by a party. The party itself was focused on Jake given the type of party that traditionally accompanies a bar mitzvah.

Was there a specific theme or style? The theme of the party was safari. We called it “Jake’s Jungle Jam.”

What inspired the theme or style? From an early age, Jake loved animals, and that interest has stayed with him as he grew up. At some point during the planning stage, his paternal grandfather decided to take Jake on an African safari the summer after the bar mitzvah. Finally, a safari theme just seemed like a lot of fun

What were the playful twists that make your event unique?The decorations were really over-the-top and festive. The room just felt fun, and really inspired everyone to go “wild.” The best parts were the seat covers in various animal prints, and the carved wooden animals that the South African decorator had brought back from her homeland.

Did you DIY any of the details? We had a graphic artist friend help us create a Jake’s Jungle Jam logo that we incorporated throughout. We used it on napkins, and we also made “Thanks for getting wild with us at Jake’s Jungle Jam” stickers. We put the stickers on Zebra cakes packages, and used these as party favors.
We also used her graphic artwork to make place cards that looked like luggage tags. We took an old trunk and covered it with stickers that we printed off the internet (to look like the trunk had been stamped in various African locations). The place cards were tacked to boards that we covered in burlap and placed in the trunk, and we surrounded the trunk with safari items, like khaki clothes, binoculars, and canteens. It all made for a very fun display.

What was the most memorable moment? During the ceremony, it was watching my child read from the Torah and when my husband, son and I all gave speeches. It was very emotional and meaningful. During the party, it was dancing the hora, especially when they put us up in the chairs. It just felt like pure all-out celebration.

Tell us about the food and desserts! The food was great. We had passed around hors d’oeurves during the cocktail hour, including butternut squash soup in shot glasses, lamb meatballs, tuna tartare bites and goat cheese crostini. For dinner we had a buffet with an African-spiced chicken and a carving station with salmon. We also had a pasta station with mushroom ravioli and penne. There was a variety of sides, many with seasonings or ingredients in keeping with an African theme.
For dessert there were various pick-ups, tiramisu in shot glasses, chocolate tartlets, etc.

What kind of energy did your entertainment give? We had an incredible DJ that really kept the party going all night long. Many of our friends told us they barely sat down the entire night. The DJ kept the energy up by bringing out giveaways, having special dances (e.g. mother-son, line dances) and just motivating people out on the dance floor to keep going. The DJ had a screen playing video of our guests dancing, which people seemed to enjoy.

If there was was one thing you could change, what would it be? There was a mix-up during the service that caused the service to run long. The mix-up itself was unpleasant, and then it impacted the timeline for rest of the evening, making some parts a bit rushed. So in the future, I would make a contingency plan with all my vendors for how to handle the party not starting as planned (fortunately, the guests really did not feel the affect and the vendors did great.)