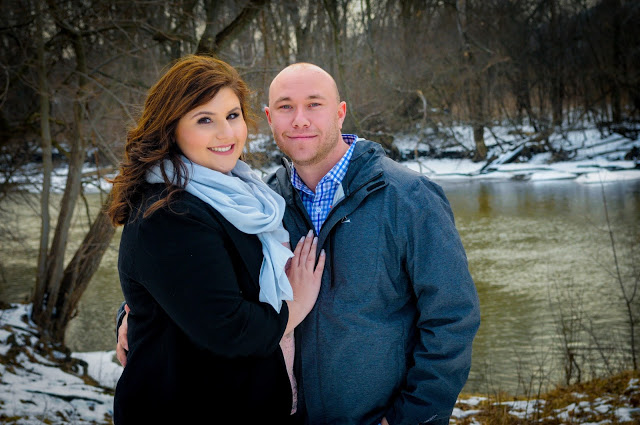 Robert and Stephanie met at Indiana University. On their first date, the soon-to-be couple went ice skating and grabbed dinner at Finch’s Brasserie, one of the best restaurants in towns. After the meal, Robert got called into work but Stephanie was having so much fun that she ended up going along with him. To thank her for waiting while he closed up shop, Robert gave her a bottle of her favorite wine.
A few dates later, Robert took Stephanie on a walk through Indiana’s campus that ended at the Rosewell House. Legend has it that if a couple kisses there, they’ll never kiss anyone else. Stephanie and Robert knew that they wanted to be together forever, so they sealed their date with a kiss.
Almost four years later, Robert proposed to Stephanie in November 2015 by recreating their sweet Rosewell House date. He told Stephanie that they were just going on a walk through campus but lead her back to the romantic building. Here, Robert got down on one knee and asked her to be his wife. Unable to get any words out, all Stephanie could do was shake her head yes with tears in her eyes. However, the surprise wasn’t over just yet- Robert pointed out towards the field near the house and Stephanie saw that all of his groomsmen and family had come down to share their love and support.
Robert and Stephanie will tie the knot this December at the Orchard Ridge Farms Pavilion in an elegant winter ceremony. Surrounded by 130 acres of apple orchard, Stephanie will walk down the aisle in a stunning ivory and champagne-gold dress and celebrate late into the night with her new husband, family and friends. The couple are beyond excited to become husband and wife, but now the celebration has an extra cherry on top: their ChicagoStyle Weddings honeymoon! The couple will spend six idyllic days at El Dorado Spa Resorts in Mexico, courtesy of Hotels by Karisma (provided by Starship Travel.)
Want to see what else ChicagoStyle Weddings is giving away? Head over to chicagostyleweddings.com and check out our latest contest!
By CSW Admin|2017-09-12T09:04:43-05:00October 12th, 2016|Blog, Past Contest Winners|